Leeds forward Patrick Bamford got back on track as his superb goal inspired a 3-1 win that ended Leicester’s seven-match unbeaten run in the Premier League on Sunday.

After scoring six goals in his first six Premier League games for Leeds, Bamford had endured a barren spell that raised questions about his suitability for the central striker’s role.

The 27-year-old answered the critics in style at the King Power Stadium when he fired into the top corner for just his second goal in seven games.

That capped an impressive fightback from Leeds, who trailed to Harvey Barnes’ early goal before Bamford set up the equaliser for Stuart Dallas.

Bamford was the provider again in the closing stages when his unselfish pass was tapped in by Jack Harrison to clinch Leeds’ second successive victory.

Third placed Leicester were unbeaten in their previous nine games in all competitions and would have gone second with a win.

But they remain five points behind leaders Manchester City after paying the price for failing to convert their chances without star striker Jamie Vardy, who is recovering from a hernia operation.

Leicester had thrashed Leeds 4-1 in November and they made the perfect start to the rematch in the 13th minute.

Cutting in from the left, Barnes surged through the Leeds midfield, exchanged passes with James Maddison and drilled a fine low finish into the far corner from 12 yards.

It was Barnes’ 11th goal of an impressive season, but Leeds had the perfect response with a lethal counter-attack 127 seconds later.

In almost a carbon copy of Leicester’s opener, Dallas made a break from midfield, ran onto Bamford’s pin-point pass and steered a clinical strike past Kasper Schmeichel.

Ayoze Perez thought he had restored Leicester’s lead in the 20th minute but the goal was disallowed for offside after a VAR review.

Schmeichel made an even better save to keep out Raphinha’s stinging drive.

Leicester had a penalty claim rejected by VAR after Wesley Fofana was bundled over by Liam Cooper, while Youri Tielemans’ long-range shot was held by Meslier.

But Bamford put Leeds in control in the 70th minute.

Taking Raphinha’s pass in stride just inside the area, Bamford looked up and curled a superb strike into the far corner for his 11th goal of the season.

With six minutes left, Leicester were caught with too many players forward and Bamford sprinted away before slipping a pass for Harrison to slot into the empty net. 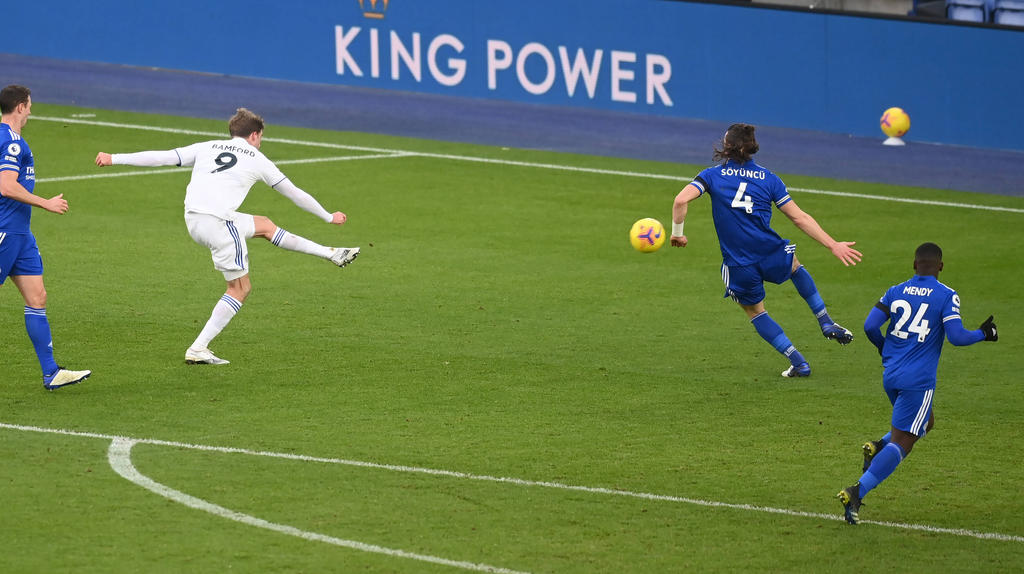